How I Became a Superman Fan

Looking for a holiday gift for a Superman fan? Or a superhero fan? Hope you’ll check out my and Gurihiru’s Superman Smashes the Klan!

The first square-bound issue is available now at your local comic shop. (Not sure where that is? Visit http://www.comicshoplocator.com!) The second will be out on Wednesday, December 18th!

Superman and me, we got some history.

The very first comic of my collection was a Superman comic: DC Comics Presents #57 starring Superman and the Atomic Knights. My mom bought it for me off of a spinner rack at our local bookstore. I can’t say I was particularly thrilled. 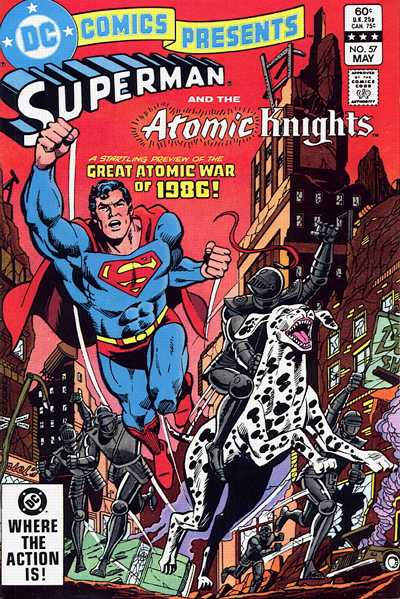 As a kid, I thought Superman was the most boring superhero ever. He flies around Metropolis in blue tights and a cape, looking for good deeds to do, like a giant flying boy scout working on his citizenship merit badge.

He never swears, never breaks any rules, always does the right thing. Boring. Kind of like my parents.

I became a Superman fan around the time I began appreciating my parents. Both my mother and my father are immigrants, and they’re the furthest thing from boring. My mother’s family escaped from China just as the Communist Party came into power. My grandfather sent his young family to safety first, then escaped by strapping himself to the side of a train that was already overflowing with passengers.

Both of my parents came to America and earned Masters’ degrees. No easy task, especially when you’re studying in a language that isn’t your first.

My parents were always aware that many Americans (though certainly not all) saw them as foreign. And a lot of what I interpreted as “boring” was really just them trying to counteract that perception. Like many immigrants, my parents tried hard to be perfect citizens so that their citizenship would never be questioned.

I wonder if Superman is doing the same thing. After all, he’s as foreign as you can get — an actual alien from outer space. The ultimate outsider.

Another of my graphic novels, American Born Chinese, is all about being an outsider. Ever since it was first published in 2006, I’ve been lucky enough to visit schools, libraries, and bookstores all over the country to talk about its themes.

In my discussions with kids and adults, I’ve discovered that the outsider experience is nearly universal. Not everyone is an outsider because of their cultural heritage, but most of us have gone through a time when we would have given anything to fit in a little bit better.

Ironically, the outsider experience is so common that it can be a point of connection between people.

That’s actually how I finally connected with the Man of Steel. That’s how I became a Superman fan. What makes him different — the fact that he’s an alien — is his greatest weakness. Glowing green rocks from his home planet — physical pieces of his foreign heritage — can actually kill him.

Yet, what makes him different is also the source of his superpowers. And so he embraces it, not for his own sake, but so he can serve others, even people who hate outsiders like him.

Superman is a model for anyone who has ever felt like they were on the outside. Embrace what makes you different. Let it empower you. Then use that power to serve those around you.

I’ve been writing Superman comics for a few years now, but Superman Smashes the Klan is really the first time I’ve gotten to express what I truly love about Superman.