Dark Horse has it up on their website, so I can finally talk about what I’ve been working on since January:  I’m writing the new Avatar: The Last Airbender comic book! The art is by the amazing Gurihiru, the Japanese team behind many of the most awesome stories in Avatar: The Last Airbender – The Lost Adventures.  The pencils I’ve seen have been pure comics bliss.  I giggled when I first saw them.  Out loud.  No joke.  I sounded exactly like my four-year-old daughter when she gets an ice cream cone.  Only I am a thirty-eight-year-old man.

One of the best things about this gig (and there are many, many good things) is that I get to work closely with Mike DiMartino and Bryan Konietzko, the creators of Avatar: The Last Airbender.  I e-mail them, like, all the time, and they totally e-mail me back.  It’s awesome.  I get to see how they approach a story, how they think through characterization, how they build tension.  I get to steal a little of their mojo.  I’ve learned so much.

This isn’t the first comic I’ve done on Avatar: The Last Airbender.  Right before the live-action movie was released, I did a short webcomic protesting the movie’s casting decisions.  I still feel pretty strongly about it.  If you get a couple beers in me and bring up the topic I’ll go off like an Asian Samuel L. Jackson.  I have yet to see the movie, and now I have an even better reason to avoid it: the only A:TLA universe I want inside my head as I’m writing these comics is the animated one.  The real one.

There’s so much more to say…about the comic’s plot, about how it relates thematically to my books at First Second, about why I think A:TLA expresses something quintessentially Asian American, about the folks in the A:TLA fanbase I’ve gotten to know, about the good people at Dark Horse who are guiding me on my first foray into mainstream-ish comics… but for now I need to go to sleep.  I’ve got deadlines and our first full week of school to worry about.

(The image below is fan art I drew because I’m excited about this project– it’s not a scene from the comic or anything.  Although an Aang/Monkey King team-up would be sooo cool.) 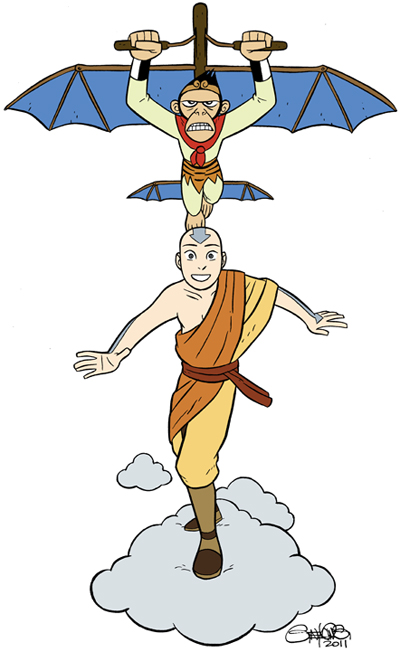