I had a blast at the LA Times Book Fest last weekend.  First, Boxers & Saints won the LA Times Book Prize for Young Adult Literature!  I was listed alongside some of our very best YA authors: Elizabeth Knox (Mortal Fire), Rainbow Rowell (Fangirl), Joyce Sidman (What the Heart Knows: Chants, Charms and Blessings), and Jonathan Stroud (Lockwood & Co: The Screaming Staircase).

I also got to hang out with some really amazing people. (Just a warning — I’m about to name-drop like NOBODY’S BUSINESS.) 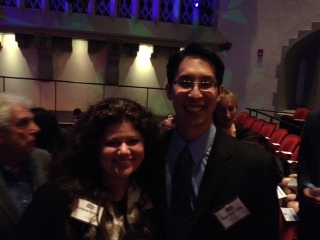 The lighting makes Rainbow and me look like a panel out of Frank Miller’s Sin City.

I met Rainbow Rowell for the first time and we connected over 80’s comics.  She’s currently working a graphic novel with Faith Erin Hicks, one of my favorite cartoonists ever, for First Second Books.  It’ll blow your mind when it comes out, I guarantee. 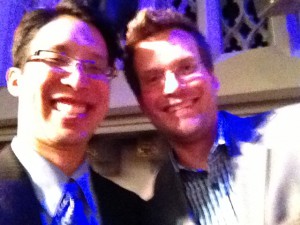 I also got to hang out with John Green, albeit briefly.  He and I first met when we were both honored by the Printz Awards folks way back in 2007.  Since then, John’s become a full-blown rock star.  I shared a golf cart ride with him from one venue to another (golf carts to authors are like limos to rappers, in case you didn’t know), and women freely professed their love for him from the street.  I wanted to too, but that’d be weird, right?  To get off the golf cart just to yell “I love you” at John Green? 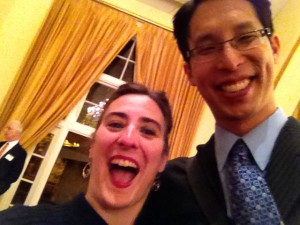 Cecil and me bein’ fancy.

In a Venn diagram of the book industry and the comic book industry, Cecil Castellucci fits right in that overlap space.  She write both YA novels and comics.  Odd Duck, her GN with Sara Varon, just got nominated for an Eisner Award!  (Congratulations, Cecil!)  She’s also one of the funniest people ever.  Whenever she does an impression of… well, anybody, she makes them sound like Chris Farley.  Hilarious. 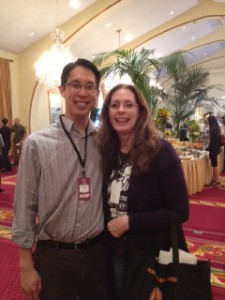 After this photo, Laurie Halse Anderson went to author talks to fill her mind. I went to that table behind us to fill my stomach.

Laurie Halse Anderson and I did a panel with Eliot Schrefer and Jason Reynolds at PLA a couple months back.  It was one the best panels I’ve ever been a part of.  Laurie was speaking at the LA Times Book Fest on Sunday, but she came on Saturday just to attend talks by other authors.  Professional development.  I guess that’s how you become Laurie Halse Anderson — you never stop learning.