My answer: First, stop being racist. And Lego-ist. Second, a yellow complexion in Legoworld is not an indicator of race. It’s actually the exact opposite, an indicator of non-race. Lego didn’t start making minifigs with real-world skin colors until 2004, and even now they only do it if the minifig is based on a real-world person (as in the case of Lego Jason Kidd) or a fictional character played by a real person (as in the case of Lego Lando Calrissian, which I believe is the reason they changed their skin color policy in the first place). For minifigs who live in Lego-owned themes like City or Kingdoms or Ninjago, everybody’s still a (supposedly) non-racial yellow.

You might be thinking: “Why does this guy know all this?”

In any case, I’ve got this little collection of Lego minifigs that are all supposed to be Asian or Asian American. Some are from Lego’s licensed themes, others are from Lego-owned themes. I’m going to share them with you, one at a time.

Here’s the first minifig from my collection: 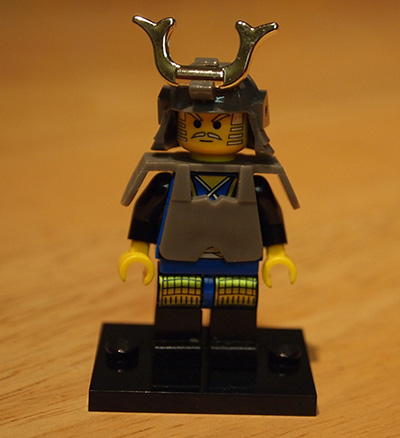 Blue Samurai Guy (not his official name). I got him as part of a Ninja set years and years ago, in the late 90’s. I was dating my now wife and I think I’d read some article about how you should do new and interesting things on dates. We’d never built a Lego set as a couple, so we went out to Toys R Us, bought this set, and put it together. I thought it was new and interesting, but we never did it again. Blue Samurai Guy is from a Lego-owned theme, hence the bright yellow skin.  Most awesome thing about him?  You can actually attach a sword to his helmet so he can fight with his head.

If anyone knows Blue Samurai Guy’s actual name and the set he came from, please let me know.

For the record, I LOVE Lego. I think they’re one of the most awesome companies in the world. I deeply, deeply admire their philosophy of creativity. But I also think it’s interesting to see how race is interpreted through this medium of plastic.

Update: Turns out, Blue Samurai Guy’s real name is Shogun, Blue with Armor.  A friend who is way more of a Lego maniac than me sent me the link.  Also, check out this awesome comic strip by Tak Toyoshima!