It’s that time again… Lego Asians Time!  This week’s minifig is definitely the most, um, controversial one in my collection.

I present to you the inscrutable Emperor Chang Wu! 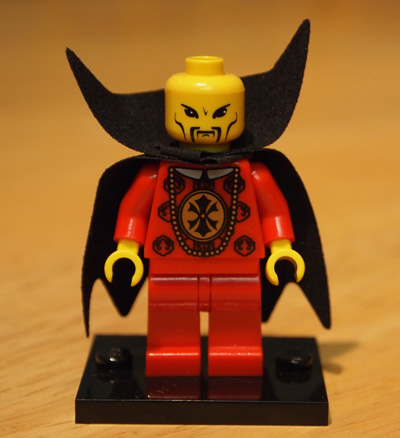 Now, when we consider Emperor Chang Wu, it’s important that we not fall into presentism – the tendency to interpret the past through today’s moral lens.  Emperor Chang Wu was released by Lego in 1923.  Things were different back then.  Commercial air travel and communication technologies hadn’t yet connected the world into a global village.  To most Westerners, the East seemed remote, exotic, and even a little threatening.  Western popular culture capitalized on these fears with yellow peril villains like Fu Manchu and Li Shoon.  Lego was simply reflecting–

Oh, wait.  What’s that?  Lego didn’t release Emperor Chang Wu in 1913?  It was actually 2003, when yellow peril villains had been out of the spotlight for decades?  As part of a theme called Orient Expedition?

Well, the most awesome thing about Lego – especially the Lego-produced themes like City and Space Police and yes, Orient Expedition – is that there are no predetermined storylines, no predetermined heroes or villains.  In my Orient Expedition, Emperor Chang Wu is the good guy.  When he dons his magic black cape, he gains the wisdom and strength of a thousand Pegasi (that’s plural of “Pegasus”).  Also, he can fly and read minds.  Oh!  And change into any form of water.  And shoot green lasers out of his eyes that magically heal rather than burn.