What brought you to this blog post?  Was it the alignment of the planets and the stars?  Was it those strange cloud configurations in the sky?  Or did you feel it in the depths of your soul?  How did you know that it’s Lego Asians Time? 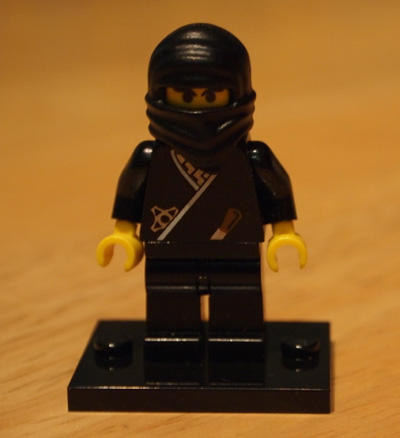 I got him over a decade ago, as part of the same set as Blue Samurai Guy.  He’s pretty cool.  His mask has a handle on the back where you can attach his sword.  He even has a cool red sweatband underneath his ninja mask.  Such attention to detail!  Good job, Lego! 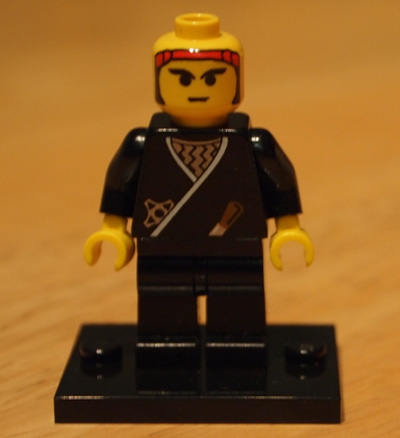 The set was part of Lego’s late 90’s Ninja theme that featured samurai, ninjas, awesome-looking traditional Japanese architecture, and bonsai trees.  I’m not sure how well the theme did for them, but I’m pretty sure it wasn’t even in the same ballpark as their current Ninjago theme, which uses many of the same molds and pretty much owns the world. What is Ninjago, you ask (if you’re over the age of twelve)? Why, they’re the Masters of Spinjitzu.  Check ’em out over at Lego.com.

Last year, the Ninjago shelves at Targets across the country were consistently bare – the set were just too popular.  The Ninjago cartoon show was among Cartoon Network’s most watched.  The Ninjago graphic novels were on the New York Times bestsellers’ list almost every week.

So how did Lego turn recycled, decade-old molds into a wildly successful theme?  Here are a few theories I came up with last night.   (Yes, this is what parenthood has wrought.  After my kids go down, I don’t even have enough energy to click on the TV.  All I can do is sit in a darkened room by myself, drink a beer, and contemplate little plastic ninjas.)

1.  Story.  Humans are a storytelling species.  Things are just more compelling to us when stories are attached.  There was no storyline to go with the old Ninja theme.  There is with Ninjago.

2.  Awesome names.  Here are the minifig names from the old theme:  Shogun, Ninja, and Samurai.  Boring, right?  In Ninjago, the heroes have names like Zane, Kai, and Jay.  Not just awesome for boarding school kids, but also awesome for minifigs.

3.  Color.  In the old theme, all the characters had black hair.  Made sense, since it was modeled after ancient Japan.  In Ninjago, the characters have blonde, brown, and black hair. Now, I think there are very practical reasons for this.  Lego wants the heroes of Ninjago to be distinctive and there just aren’t a lot of physical features to vary besides hair color on a minifig. On the plus side, the diverse hair color makes it easier for a wider segment of the audience to identify with the characters.  On the minus side, it smacks a little of Western pop culture’s tendency to exclude Asian people from its depictions of Asian culture.

4.  Pokemonification.  I have to tell you, I’m surprised that Microsoft Word underlines “Pokemonification” in red.  It really needs to be an official part of our language because everything in our culture is getting Pokemonified.  Like Pokemon, Ninjago characters can be (1) collected and (2) made to battle.  They even come with little Pokemon-like cards!

That’s it for this week.  I’m off to figure out how to Pokemonify my comics.  If only there were some way for them to battle each other…