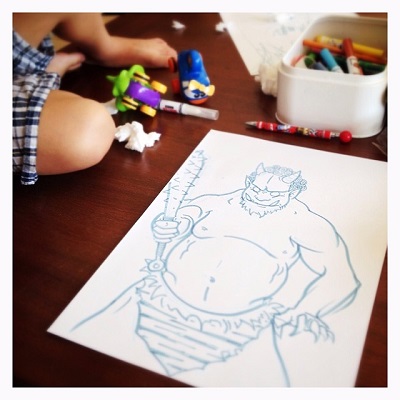 My friend Luke and I could not be more different.  He’s got full sleeve tattoos.  My arms are as unblemished as a newborn baby’s butt.  He sports a stylish goatee.  I can’t grow connectors (the hair that connects your mustache to your beard) to save my life.  He’s really into Brazilian Jiu-Jitsu, and it shows in his build.  I’m really into watching cartoons on Netflix, and it shows in my build.

Luke and I are children of the eighties.  We grew up reading the same stories – Chris Claremont and John Byrne’s X-Men, Frank Miller’s Daredevil, Todd MacFarlane’s Spider-man.  We discovered the wider, more diverse world of American independent comics at around the same age.  But despite being a lifelong comics fan and a gifted artist, Luke hasn’t yet made a serious attempt at making a comic. 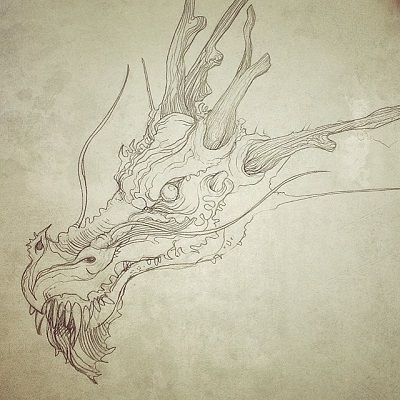 Luke’s drawing of a dragon

Luke’s always been a creative person.  He currently runs his own line of men’s jewelry.  But lately, his childhood love of comics has been calling.  A story idea popped into his head and won’t leave him alone.  He e-mailed me to ask what he should do next.

I love working with other comic book creators, in part because I learn so much in the process.  That’s why I joined the faculty of Hamline University’s MFA Program.

Luke’s project sounded interesting.  I asked him if he’d be willing to work with me in public, so other folks could see what the development of a comics creator looks like.  I knew I was asking a lot.  The creative process is so intensely personal.  To expose it to strangers, especially when you’re just starting out, is more than intimidating.

But Luke agreed — he’s nothing if not brave.  I guess all those tattoos aren’t for nothing.

So here’s how it’s going to work.  Periodically, Luke is going to e-mail me his work-in-progress.  I’m going to review it and give him notes, similar to what my editors do for me.  I’ll also give him assignments, things that will help him get his comic done, or improve his work, or both.

Then I’ll publish our exchanges here, for you all to see.  If you have anything to add, please chime in in the comments section below.

Now let’s get started!  Without further ado, here’s Luke’s first e-mail to me:

I wanted to approach you about being a mentor to me in producing my own comic from the ground up. In my younger days I made many attempts to draw comics but without a developed storyline that resulted in mostly action sequences. Now that I’m older with wife and kids, I’d like to revisit this dream to produce something that reflects my experiences, interests and most importantly a final product that I can share with my family. I believe my drafting skills are adequate but most importantly I want to tell a good story and is why I’m approaching you about.

I have a basic idea of elements that I’d like to include but I’m not sure how to begin putting these parts together. I’d like to follow a similar story arc as Lone Wolf & Cub of revenge/redemption, but in a world of monsters/creatures. The main character is a martial arts student on the cusp of becoming a master, but is betrayed and framed for the downfall of his school. It’s on this journey for revenge that he evolves through each experience/challenge/battle that he faces. 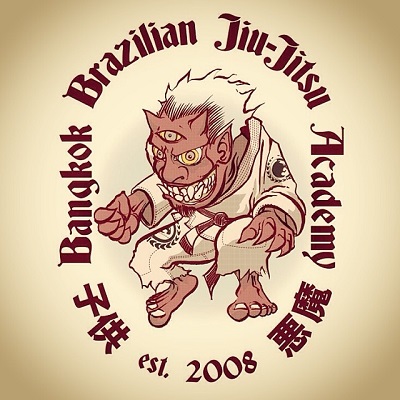 The idea was sparked by a term coined in the Brazilian Jiu-Jitsu community, “Creonte”. It’s a name that has been adopted to represent or mean ‘traitor’ in the worst way. What I find interesting about this label is that the circumstances are not always so clear or clean as to what constitutes a creonte. The character is named this but over the course of the story, we may relook at what aspects are true about this character and how it’s not entirely black and white.

I know this is not a small request but any help would mean a great deal to me. Thanks.

First, this is awesome!  I’m so glad you’re taking the first step in making a comic book!  “Creonte” sounds like an interesting concept with rich possibilities.

But first things first.  Making a comic book is a difficult, time-consuming task.  It’ll take a lot out of you.  I sometimes tell people that if you want to make a comic, you have to give up all your TV and half your friends.  You really have to be disciplined.  You have to force yourself into certain habits, because halfway through a project you’re going to feel like quitting.  We all do.  Habits are automatic and will get your through these times.

When Toyota designs a new car, they don’t just design the car, they also design the factory that makes the car.  You have to do the same thing.  You’re not just making a comic, you’re making a way of life that supports making comics.  Your life is the comics-making factory.  You need to come up with a writing/drawing habit and stick to it.  Set aside time on a weekly or even daily basis to work on your comic.  Get your family, especially your wife, to buy into it and keep you accountable.  This can be an hour every evening after your kids go to sleep, an hour every other morning before you go to work, three hours two times a week, whatever works for you.   And for the first year at least, you have to be a zealot about this.  Eventually, your habit will become a part of you.  It’ll just be the shape of your life, and even when things disrupt it, your life will return to its comics-making shape when the disruption is over.

But in the beginning, be a zealot.

Next, you need to write a plot summary (or outline) of your story.  This is a description of every major incident that happens in your story.  You’re not worried about pretty language or dialog here.  You just want to get your ideas down and organize them into a satisfying structure.

Here’s an example. This is the plot summary I did for American Born Chinese

It’s going to take several passes to get your plot summary right, so don’t worry if you feel like flushing your first draft down the toilet when you’re finished with it.  There’s a reason people sometimes call the first draft the “vomit pass.”

There are lots of ways of writing a plot summary.  For you, because you mentioned that you have a bunch of elements that you want to put together.  I would suggest using the Post-It method.  Here’s what you do:

This is gonna be awesome!