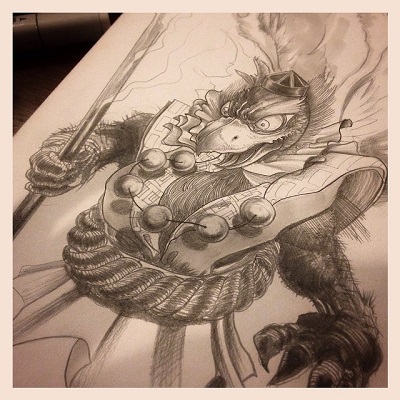 My friend and brother-in-law Luke is making his first comic! He asked me to help him along the process, and we’ve decided to post our interactions here.

In case you missed it, here’s how we got started:

Luke’s been at it for about a week now.  Here’s our latest exchange.

Well, the outline isn’t quite finished yet but I’ve amassed a sizable collection of post-it notes with different ideas or plot-points on them. Obviously there are more ideas than can fit, I think, into the outline but will keep at it and hopefully have a first draft for you soon. A few questions came up during this process that I’d like to ask now.

Given that I’m far more a visual person than a literary one, I’m constantly imagining how these things will be drawn and what style of drawing will best serve the story. Throughout the years due to the different jobs I’ve taken on I’ve never fixed myself to a single style of drawing. And while my preference is for darker imagery, I am capable of drawing both pretty and cute things too. Perhaps this is too early in the process to be making any decisions but how much visualization do you do while writing the story? And how much of these early ‘visual ideas’ actually play out to the final outcome? I guess another question I have is more on the pragmatic side is whether I will be able to keep consistent the style of drawing throughout the process and do I pick a style that’s efficient to match the limited time I may have.

So I’ve attached a few examples of drawings that I’ve done recently for my kids as they are now getting into super-heroes. I do my part to share with them the characters that I grew up on both from the US and Japan. And given my time is limited with a fulltime job, wife, and a kids, I’ve started to go to bed much earlier so I can wake up at 4-5am to work on this with complete silence and focus. This gives me roughly an hour to 2-hours before the kids wake up. I’ve found that when I try to work at night I’ve got too much on my mind built up from the day and when I’m able to get up super early, it’s like I pushed the reset button on my brain and things move along much smoother.

Will be in touch soon but would love to know your thoughts on my questions as I progress on the writing portion. 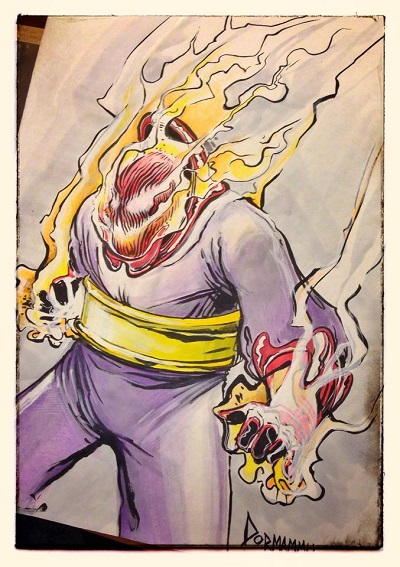 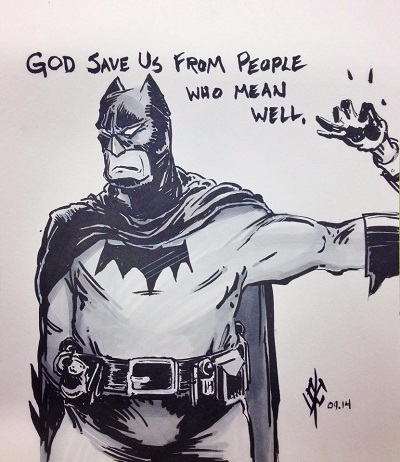 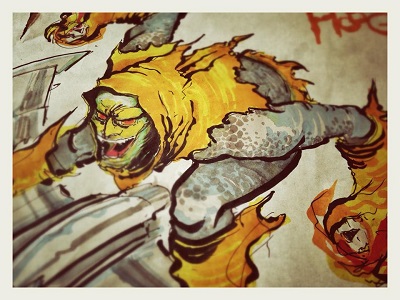 Sounds like you’ve got your comics-making factory in gear!  That’s awesome, but make sure the habit you’re establishing is sustainable in the long-term.  Waking up at 4-5am every morning is pretty rough.  Ask your wife to keep you accountable.  Give yourself predetermined breaks during the week – don’t wake up that early every morning! You ever read this book called The Power of Habit by Charles Duhigg?  It’s all about making new habits for yourself.  One of his suggestions is to attach a reward to your new habit.  For instance, if you’re trying to get yourself to workout, give yourself a smoothie after each successful workout.  Your brain will start associating pleasure with the habit, making it more likely for the habit to stick.

Whatever you choose, remember that art is a long haul.  Have the support in place to get you to the end.

Also, I hear you about working at night.  I’m not 22 years old any more.

Now for the other stuff you asked about:

Sketches during the outlining process. Doing sketches can definitely help in the outlining process, especially for visual people.  Sketches, especially sketches of entire scenes rather than individual characters, can trigger plot ideas.  However, building an outline is still a words-based process.  If you’re sketching, give yourself a sketching time limit.  Don’t spend too much time making a detailed sketch.  The bulk of your time should be spent on the words of the outline.
Here’s my cockamamie theory about all this:

When we make comics, we’re getting something inherently random access – pictures – to act sequential access.  That’s why Jessica Abel and Matt Madden refer to making comics as “writing pictures.”

By writing an outline, you’re forcing your visual brain to think sequentially.  You aren’t just hammering out the plot of your story, you’re also prepping your brain to do the hard work of breaking your story into sequential panels.

Drawing style.  Given your subject matter, I think a darker tone would be appropriate.  Even beyond that, though, this is your first comic.  Do it in a style that’s “native” to you so you can put your energy in other places, like story structure and character design and panel composition.  Give yourself home court advantage for your first game.  I know you, man, and “pretty and cute” is definitely not your home court.

Consistency.  This is something that I struggle with.  No matter how hard I try to prevent it, my characters always change as my stories progress.  This one’s nose gets a little longer, that one’s head gets a little more square.  It drives me crazy, and sometimes I end up redrawing early pages to get them to match the later ones.

There are a couple of things I do to mitigate this.  First, I draw model sheets for all my major characters.  This is something they do in the animation industry to get all the animators to draw the same.

A model sheet is a page that shows a full body front view of a character, a full body side view, and a few of his/her most common facial expressions. Here’s one I did for Prime Baby: 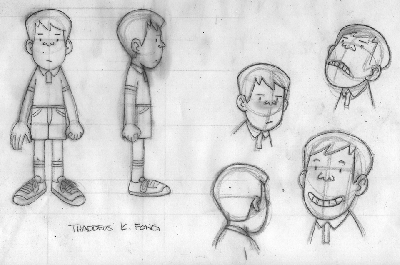 I keep these taped up by my desk as I draw.

Second, when I design my characters, I think of them as the letters of an alphabet.  You can tell that an A is an A and a B is a B because their designs are so distinct.  You can write them kind of messy, you can write them in different fonts, and you’ll still be able to tell them apart.

I try to do the same thing with my comics’ characters.  I give each a few distinguishing characteristics – a nose shape, a hairstyle, something – so that even if I’m having a bad drawing day the reader will still be able to tell my characters apart from one another.

This might be why superheroes work so well in comics.  Pointy ears and a utility belt means Batman regardless of the artist’s style.  Bulky and green means the Hulk.  Tiara and lasso means Wonder Woman.

Osamu Tezuka is a master of this.  Most of his stories are not about superheroes (as an aside, I consider the Mighty Atom a superhero) but he still applies this comic-characters-as-letters ethic to his designs.  With all of his stories, you can tell who’s who even in silhouette.

All that said, consistency is still something I struggle with.  With my first comic, my characters and style changed wildly from the first page to the last.  I imagine the same will be true for you.  This is okay, though.  The primary point of this comic is your growth as a cartoonist.

Also, maybe consistency in comics is overrated.  Comic books aren’t animation.  Ever read The Rabbi’s Cat by Joann Sfar?  That dude is proudly, purposefully inconsistent, but you never get lost.  His comics are heartfelt and beautiful.

Finally, thanks for sending those drawings to liven up the posts.  It’s been a while since we drew together– I’d forgotten what an amazing artist you are! Can’t wait to see your art in something sequential!