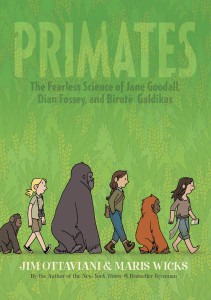 Folks are sometimes surprised when I tell them that I’m both a cartoonist and a high school computer science teacher, and I think it’s because our society puts up a wall between activities it deems “left brain” and those it deems “right brain.” Math and science inhabit one world, art and story (and comics) another.

But this division is artificial. Take a look at Leonardo Da Vinci, M.C. Escher, Scott McCloud. We have an entire genre — Science Fiction — that blends science with story.

For me, making comics and computer coding are intimately linked. Both disciplines require you to break large ideas into small, discrete pieces. You have to take relatively simple elements and arrange them in a way that achieves complex results. And in both, the possibilities are infinite.

These days, there’s a lot of talk about S.T.E.M. (Science, Technology, Engineering, Mathematics). Teachers and parents worry that American students are falling behind in these areas. I haven’t looked at the data myself, so I’m not entirely sure that’s true.

But if it is, let me tell you: Comics can help.

Here’s a list of great S.T.E.M. comics, broken up by topic:

Primates
by Jim Ottaviani and Maris Wicks
Ever wonder why Jane Goodall is such a big deal? Read this book. It’s highly accessible and Maris Wicks’ illustrations are just beautiful. Also, if you’re looking for a big list of science comics, just Google Jim Ottaviani. That’s his thing. And honestly, he’s really good at his thing.

Clan Apis
by Jay Hosler
Jay is both a Biology Professor at Juniata College and an incredibly talented cartoonist. Clan Apis follows the adventures of a bee named Nyuki. Readers will be completely charmed by Nyuki while learning about her life cycle and natural environment.

Secret Coders
by Gene Luen Yang and Mike Holmes
(I’m about to self-promote. Consider yourself warned.) Cartoonist Mike Holmes and I are doing a middle grade graphic novel series all about the magic of coding. Here’s how we’re pitching it: Secret Coders is kind of like Harry Potter. A bunch of tweens find a secret school. However, instead of teaching magic, the secret school teaches coding. We’re hoping that as our protagonists become coders, our readers will too. First volume will be available September 2015!

Howtoons
by Saul Griffith and Nick Dragotta
Wanna be impressed? Go read Saul Griffith’s Wikipedia page. The dude is seriously smart. Illustrator Nick Dragotta isn’t to shabby, either. He’s probably best known for his work on East of West with Jonathan Hickman. Their book Howtoons is probably my 11-year-old’s current favorite book. This book will teach you how to build marshmallow guns, plastic finger extensions, and toy submarines out of common household items. Become a mini-MacGyver.

Lego Instructions
This isn’t a book, so don’t go looking for it at your local bookstore. Instead, find a Lego set and take a look at the instructions. Juxtaposed images in deliberate sequence, intended to convey information. That’s right! Lego’s one of the world’s most prolific publishers of comics, and it probably doesn’t even know it.

Meanwhile
by Jason Shiga
Jason Shiga is a math genius. If a comic book and a maze were to have a baby, the baby would look like Meanwhile. This is a choose-your-own adventure graphic novel with 3856 story possibilities! Only one happy(ish) ending, though. Along the way, the reader learns all about statistics and probability.

Fleep
by Jason Shiga
Jimmy gets stuck in a phone booth buried beneath several tons of concrete! Armed with nothing but his wits and a knack for math, he must find a way out! This is arguably the best phone booth story ever told, way better than that Colin Farrell movie, but it’s definitely for older kids.