This seems to be a week of making art for auctions. A couple days ago, I posted a drawing of Guan Yu that I did for an upcoming auction at ALA Chicago.  Here’s one for BEA 2013 in New York. 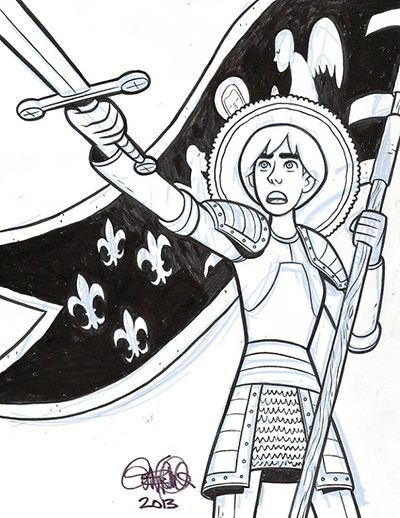 St. Joan of Arc also shows up in Boxers & Saints, my two graphic novels about the Boxer Rebellion (available from First Second Books this September).

There’s this strange dynamic I’ve noticed in my (admittedly shallow) study of history.  Over the last couple of centuries, Western culture has had a tendency to be pretty… aggressive.  The people groups who the Westerners encountered – and often oppressed – would sometimes, ironically, find strength in Western stories, specifically Western religious stories.  I think Steven Spielberg played with this dynamic in Amistad.  I explore it in Boxers & Saints.

St. Joan of Arc actually  has quite a bit in common with the Boxers, the young Chinese men who fought against the European powers at the turn of the century.  Both Joan and the Boxers had strange (to modern minds, at least) spiritual beliefs.  Both were teenagers. Both were poor.  Both were patriotic.  Both fought foreign incursions, and both were waaay more successful than the political elite had thought possible.  After their deaths, both were used as symbols for political purposes by their respective countries.

In my book Saints, a ghostly Joan acts as a spiritual mentor of sorts to Four-Girl, the young Chinese Catholic protagonist.  Eventually, Joan’s commonalities with the Boxers cause a lot of confusion in Four-Girl’s mind.