The Man of Tomorrow

The Man of Tomorrow 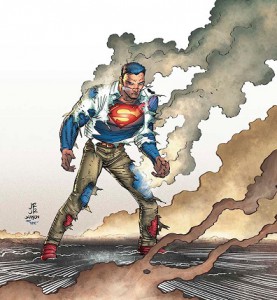 There’s a reason why folks call Superman the Man of Tomorrow.

When he was created in the late 1930’s, he really did embody that era’s ideas about the future. Back then, progress was seen in largely physical terms: our technology would make us stronger, faster, more invulnerable. And that’s what Superman was: the world’s strongest, fastest, most invulnerable person.

But in the decades since, our imagined future has changed. Nowadays, when we think of tomorrow’s technology, we don’t necessary think about physical power — we think about information. We think about knowledge. Our dreams of the future are as much about bits as they are about atoms. Maybe more.

That’s a major thread in “Before Truth,” the first Superman story arc I’m doing with the inimitable John Romita Jr. The Man of Tomorrow goes up against an enemy who wields information like a weapon, who’s as comfortable in bits as he is in atoms.

Superman’s secret identity has always been a cornerstone of who he is. But the very notion of a hidden second life represents information that’s been contained, that’s under control. In the era of Edward Snowden and Wikileaks and doxxing, is a secret identity even viable any more?

And more importantly, will Superman’s most timeless character traits — his selflessness, his grit, his compassion for the underdog — survive such a drastic change to his status quo?

For a superhero geek like me, writing the world’s first superhero has been the thrill of a lifetime. Being part of a team that includes John and inker Klaus Janson and colorist Dean White is icing on the cake. If you had told fourteen-year-old me that this project would be in my tomorrow, I’m pretty sure I would’ve leaped a tall building in a single bound.

Hope you’ll join us!  And if you want to know what life is like for Superman after “Before Truth,” check out Action Comics #41, Batman/Superman #21, and Superman/Wonder Woman #18!